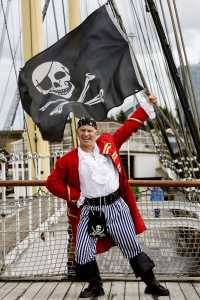 Learn how to talk like a Real Mean Pirate using the following tips to fool all the Pirates of the Caribbean. After all any fierce pirate worth his sea-legs needs to be able to speak pirate talk.

Remember to say “arrr!” at the end of every sentence and don’t forget to scowl. All pirates so it ! Although it doesn’t mean anything it helps you look mean and tough.

Also don’t forget to drop the “g” at the end of words. For example,
“I’d be savin’ me treasure to buy some more luvly rum.”

Learn how to talk like a real Pirate by learning essential pirate terms to sound even more convincing. Who knows you might fool Pirate Pete into thinking that you are a real pirate.

Talking to each other

AHOY: Hello
Example: “Ahoy there matey come on aboard me ship”

AVAST: A nautical term meaning “What are you up to?”
Example: “Avast, me hearty?”

HEAVE TO: An order to stop.
Example: “Heave to me hearties so that we can come aboard.”

ME HEARTY: My friend.
Example: “Ahoy, me hearty, will ye be up to helpin’ me look for buried treasure?”

SHIVER ME TIMBERS!: An expression of shock, surprise or annoyance. Originating from when the sea or a canon hit the ship and the ship would shake/splinter hence shivering. Timbers being the actual ship. Used laterly to mean “Shake my bones”.
Examples”Shiver me timbers that canon ball nearly killed me”. “Shiver me timbers! I just saw a ghost ship!”

YO HO HO!: Pirate Laughter.
Example: “Yo Ho Ho and a bottle of rum”

DOUBLOON: A gold coin minted by the Spanish colonies, worth about seven weeks’ pay. It was a lot of money and made good pirate treasure.
Example: “I’ll be savin’ me doubloons to buy me own pirate ship. Arrr!”

SEA ROVER: Pirate ship.
Example: “Look! On the horizon, there be a dozen or more sea rovers headin’ our way!”

JOLLY ROGER: The pirate flag with its skull and crossbones.
Example: “After pillagin’ the island, we left our Jolly Roger behind, flyin’ high in the sky to warn others to steer clear.”

KEEL HAUL: A very severe punishment by pulling someone under the keel of a ship from one side to another with ropes.
Example: “Arrr we will keel haul him if steals our treasure.”

WALK THE PLANK: A pirate punishment in which offenders were forced to walk off a wooden board on the side of a ship and fall into the ocean. This was dangerous not only because of the height they had to fall but made worse because of the shark invested waters pirates roamed.
Example: “The scurvy scoundrel stole me favourite pirate hat; I’m goin’ to make him walk the plank!”

LAND LUBBER: A term of contempt for a non seafarer.
Example: “Those land lubbers would be useless in tryin’ to sail the seven seas.”

SCALLYWAG: Bad person.
Example: “Although his crew respected him the authorities thought Blackbeard was a scallywag.”

SEA LEGS: The funny way pirates walk on board because their ships rolled about a lot on the high seas.
Example: “If it wasn’t for me sea legs I would have been thrown in the brink.”

HAVE FUN WITH PIRATE PETE

You now sound like a mean tough pirate so, come me harties and join Pirate Pete in a Magical Party Voyage.  Have fun aboard the high seas of your imagination in a non stop, high energy extravaganza but if ye be up to any mischief and ye will be sold as slaves.

After all Pirate Pete’s Kids Parties are honest to goodness ENTERTAINMENT from start to finish. Imagine how pleased you will be knowing that your child and guests are having fun in a safe and caring environment while you relax and truly enjoy their celebration!

HOW ABOUT SOME INTERESTING PIRATE FACTS?

The feared skull and crossbones flag known as the Jolly Roger first appeared in West Indian waters around 1700, and was meant to give the ship under attack the chance to surrender.

Also Pirates still operate to this day, mainly in the South China Seas and of the coast of Africa.

However not all pirates were pursued by the authorities. Some pirates known as privateers were allowed to carry on their looting and plundering as long as they paid a cut of their ill-gotten gains to the Crown.

Interestingly most Pirates had a “Code of Conduct” which they followed. For example, Captains and quartermasters were normally elected by the crew and booty was carefully divided according to agreed shares.

Successful pirates often spent huge sums on extravagant, colourful clothing and jewellery to show how rich and successful they were. Crowds would flock to the ports when a known pirate band had docked, just to catch a glimpse of them.

Blackbeard was a very famous pirate along the Virginia and North Carolina coast during the 18th century. He tied ribbons in his hair, and attached long flaming matches under his hat and to his beard to light his face and make him look like a scary ghost-like spirit.

Treasure Island, by Robert Louis Stevenson, is based on the treasure that Captain Kidd was supposed to have hidden before he was hanged for piracy.

We use cookies to ensure that we give you the best experience on our website. If you continue to use this site we will assume that you are happy with it.OkPrivacy policy